In search of Buffalo Bill 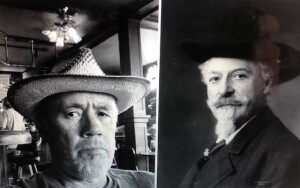 Chasing down a rumor that Buffalo Bill and I are related, I left Big Sky, Montana last week and went in search of the man. It may be just a coincidence that we both wear hats size large, but I feel we are akin in many ways and may share some bloodlines.

What’s more, I’ve heard some say that he’s alive and that he did not die in 1917 as recorded – which would make him about 170 years old. This is definitely a story worth pursuing I told myself (and my wife who said get outta my sight), and thus I set out six days ago in search of Buffalo Bill, aka William F. Cody or Colonel Cody to those who knew/know him best.

My route went south to West Yellowstone, east across Yellowstone Park, out the east entrance, and on 60 miles to Cody (a town founded by the good Colonel) whereupon I checked into the Buffalo Bill Antler’s Inn.

I caught numerous sights of the Colonel over the next couple days (mostly at the world-class Buffalo Bill Museum), but we didn’t have words together. I did see him talking sign language with an old Indian friend who’d been with him in Buffalo Bill’s Wild West Show, in which Cody convinced Sitting Bull and a whole passel of Indians and cowboys to sail across the ocean to London and Paris and put on a mythic “frontier” spectacle for 30 odd years. I mean, who does that? I’ll tell you who. Nobody – except my presumed great, grand relation – Uncle Bill.

Bill’s tracks led north from Cody and I followed them toward Montana. After about 18 miles, they angled west and I headed that way – across the Sunlight Basin, now known as the Chief Joseph Scenic Highway. It’s a vast expanse of heavenly mountains and hills that will bring you to your knees – dangerous driving because your eyes simply cannot stay on the winding road.

This is where “This land is your land” really means something. Old westerns should’ve been shot here and I thank god they weren’t. The roads are near empty; strange since it’s only 50 miles from the horde of numbskulls traipsing out into bison herds for selfies in Yellowstone Park.

Sunlight Basin is a spiritual place in ways I can’t begin to put words to; if you’re an atheist you may want to stay away if you wish to remain one.

But alas, my eyes kept wandering to the mountains and I lost the trail of my kin Bill Cody. I think he’s out there, along with many others in these parts, some I know personally who have passed on to greener pastures. (RIP Maizie).

I decided to let Bill be and drove on over Beartooth Pass to Red Lodge, a small town on the edge of the mountains where I and many others were tear-gassed on Main Street, July 4th, 1975 (see attached photo of local news of the mayhem). But that’s a story for another day.

While I didn’t catch up with my great ancestor Buffalo Bill and cannot confirm if he’s alive, I did see why he settled in this part of the universe. There’s really no place like it.

I like to think he and I will share yarns some day in the future, though mine would pale in comparison to his. I could tell him about coasting down Beartooth Pass in my parents’ Toyota in neutral with the engine off to save gas and make it to Red Lodge. He’d be amazed at that, and would want to try riding this Toyota – such a strange name for a steed.

Wouldn’t it be grand? The Colonel and I riding off together through Sunlight Basin again, as kin. If only I could ride a horse.