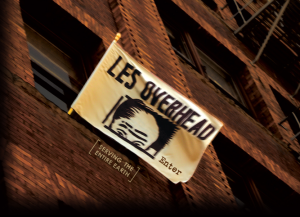 I was leaving to buy a keg for a party in the mountains outside Missoula when the phone rang. I picked it up in a hurry. A woman asked if I had recently applied for a job with a radio station in Whitefish.

“Uh, yeah, did I get the job?” I replied, anxious to move the conversation along.

“Not yet. Are you available for an interview?” I wondered if she was in town and wanted to meet right then.

“I meant next week," she said. She no doubt heard me hit myself in the head with the phone. Well, I blew that I thought.

But I was wrong. I somehow landed the job and showed up for work two weeks later, shaven and sober. After a couple years punching out radio copy on a Smith Corona and doing odd jobs like radio play-by-play for donkey basketball games I headed west.

Eventually, I ended up in Portland where I caught on with a series of ad agencies. I got into everything: print ads, brochures, radio and TV spots, creative disputes… Many words were exchanged. Nobody got hurt.

One day in the shower a hair circled the drain and it dawned on me. I should use my head and get off this manic ad agency merry-go-round. Go to work for myself and provide creative help to anyone with a good company or cause.

That day Les Overhead was born. Freelance Creative Director/Copywriter. A man of his word.