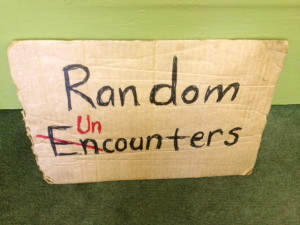 I learned something the other day about homeless people. They’re not afraid to laugh.

I was hurrying back to work after lunch. While crossing a Portland street I met a downtrodden man with a blooming, cauliflowery beard who stopped in the middle of the intersection and stammered out a few words in my direction.

“Excu, excuse me, can you,” I knew he wanted money and I stopped him dead in his tracks. “Sorry,” I said, and kept going. I didn’t want to stand in the middle of the street and listen – so I cut him off before he could say more. His weary sigh said it all – damn, I can’t even get out a question before this guy blows me off.

As I walked on down the sidewalk, I looked back and saw him across the street standing still. He was carrying a rolled up tarp and a big pack on his back. In one hand he held a large plastic bucket with a lid on it. He just stood there.

Feeling guilty, I jay-walked across the street and went up to him. “I didn’t hear your question before,” I said. “What did you want?” He lifted his eyes to mine and asked if I knew where the Portland Outdoor store was. Somewhat surprised, I said sure, it was on the corner one block over. “I’m going that way, I’ll show you.”

We started walking and I asked, “What’s in the bucket?” He replied, “Now that’s a funny story.” He started laughing and said, “A cop asked me that same question once. I told him the bucket carried sailboat fuel.” He guffawed and went on, “Sailboat fuel! The cop got mad and said he wanted a look. When he took off the lid there was only air inside!” Through his snowy whiskers came an avalanche of laughter. I grinned but didn’t laugh. It was obvious I didn’t get the joke. He explained, “Sailboats move on wind, not fuel! There’s no such thing as sailboat fuel!” He about fell over laughing.

I lied and assured him I thought it was funny as hell. But in truth, I wasn’t sure I could muster a laugh if I were in his situation. We continued walking. “So what’s the bucket really for then?” I asked. He sighed and said, “Waste management system.”

I realized that despite being homeless and carrying his own personal outhouse, he was a free man of independent means. A man who knew about sailing, laughed a lot, and had more control of his life than I gave him credit for. I doubt he would say the same for me.