The Importance of Knees 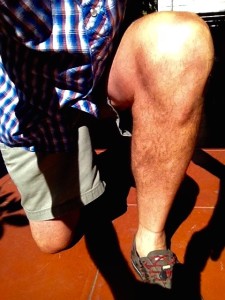 As a competitive basketball player for untold years (48), I know well how important knees are. I would never have blocked as many shots (11) or swished so many countless jumpers (1,393), or dunked in so many opponents’ faces (0), without my knees rising to the occasion time after time. Go ahead and laugh.

But today, knees are no laughing matter. Never have knees been so powerful, so impactful, so important as they are now.

The action of kneeling and the phrase “taking a knee” has taken on a nebulous new significance and meaning. Meaning that's often unclear and misunderstood. Opinions of what it means are all over the map. Arguments erupt, tempers flare, tension boils, and friendships get destroyed.

To me, taking a knee shows support and empathy for people of color who, for generations, have been disrespected, harassed, and more times murdered than we might imagine by law enforcement in this arguably great country.

Kneeling is a humble, non-aggressive, patriotic act designed to call attention to what’s going on in cities large and small, black and white.

But news is fractured with so many sources. People get their information from similar-thinking friends and media outlets (left or right) that mirror their personal views.

As disputes rise, words and sentences get more angry and mean. Extremists get microphones and seats in Congress. The media ratchets it all up for ratings and pundits pontificate as if they are the voice of God. Facts be damned.

Meanwhile, we the people get more and more steamed each day as we approach the boiling point. Frogs? Trolls?

But I have hope. Recently, a relative in the Midwest reached out to me (not me to her) and asked in a courteous manner why, as I had claimed, taking a knee was good for our country. I’m thinking she felt the opposite, and probably still does. But she was sincere and civil. She lowered my temperature. Words can do that (it's some kind of physiological thing). I paused before firing off a reply to her, long enough to tone down my rhetoric.

I’m honored she reached out to understand her wacko relative in Portland a little better. Seems we need more of that – getting out of our silos and walking and talking down paths that lead to friendship and understanding. Kneeling if need be to start the conversation.

That’s the importance of knees, to me. I’m proud to take one. I hope it holds out.