Why I no longer hate typos 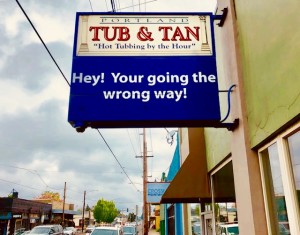 Hey! Your your should be you're. But no sweat. You're human!

Somewhere, a robot is laughing at me.

Typos used to bug the holy bejezus outta me. They drove me berserk. Whenever I saw one on a sign I wanted to tear it down. If I saw one in a news story or magazine ad I wanted to set fire to it.

Once when a Portland brewery used the words MISSION STATMENT in a huge headline in a full-page ad, I wrote to the brewer in cheeky, smart-ass style: “E” now on sale at Les Overhead! Les Overhead is my one-man business, boss, and alter ego. I didn’t get a reply.

As a freelance copywriter/CD for nearly three decades, typos have long been the bane of my existence. Years ago, I was saved from my own terrible typo incident when my client called at the last minute to say she thought I had misspelled a word in their new ad which I was about to send to the publication.

The all-important call to action I’d written had only four words: Think positive. Hire smart. The designer had retyped the copy in her layout in a small serif font and spelled positive as “positve.” I totally missed the missing “i” when I proofed it.

When my client brought it to my attention (embarrassing enough) and I saw the error with my own eyes, it dropped me to my knees. I almost blew chow thinking of how stupid I’d have looked if the ad had run. It was a full-page ad for a law firm, in a book of ads for other law firms. I’d have had to leave town. Positively.

But I have a different view of typos now. I actually like them. Because, for better or worse, typos are caused by humans. They show that an actual living, breathing person created the message and he or she made a mistake, which is human. We all make mistakes. Some are damn funny.

Automated content-generating writing is already being used in journalism and elsewhere.
Companies like Narrative Science and Automated Insights provide news bots that generate content for many different companies and publications. It started mainly with reporting on sports and stocks.

When asked what percentage of news would be written by computers in 15 years, Hammond said, “More than 90%.” He went on to say that in 20 years “there will be no area in which Narrative Science doesn’t write stories.”

When told that pontificators had predicted that a computer would win a Pulitzer Prize within 20 years, Hammond disagreed. It will happen in five, he said. I hope he’s wrong. I hope it doesn’t happen for a thousand years. Go ahead robots, laugh.

A P.R. pro once gave me a “tip” on how you can get an editor to read the press release or article you send in. It’s a risky move but kinda genius.

The idea is to deliberately insert a typo or other error in your opening sentence. Something subtle. When editors see it they will scoff, guffaw, and think how awful to have a typo in the opening line! And then they will read on, to the end, looking for more typos. They can’t help it. It’s an addiction. Of course, the rest of your press release must be smoothly and flawlessly written, sans typos.

That’s how you get an editor to read your submission. Just add a typo or spell a word wrong up front — like I did with bejezus (correctly spelled bejesus or bejeezus). Yes, it’s risky and you may look like a fool. But I like taking risks and I don’t fear looking like a fool. It won’t be the first time.

In short, I’m proud to be human. And that’s a sentence no robot anywhere, no matter how advanced, can write. Assuming it’s honest.

Hope somebody reads this all the way through.