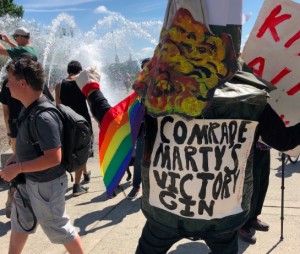 The crazies were out in full force last Saturday at the dueling Portland protest rallies – on both sides of the street. Patriots came from both left and right, including one stuffed cowboy riding a dog that was riding a skateboard towed by a guy riding a bike. And a man (I assume, but women can be nuts, too) in a dark liquor bottle getup promoting “Comrade Marty’s Victory Gin.” Leader of his own party. I passed.

Off to the side, the Unpresidented Brass Band served up a raucous backbeat to the cacophony. Turning a protest into a party. Where people come armed for a fight.

It was a beautiful day in Portland. Started sunny and ended sunny. Cops kept the powder-keg environment under control with the aid of a few flash-bang grenades. Protesters who were carrying kept their gun concealed. Human damage was minimal. Four arrests. No serious injuries. And no change in the forecast.

As homeless folks slept in the shade nearby, the Salmon Springs fountain provided a small rainbow. Nobody noticed.