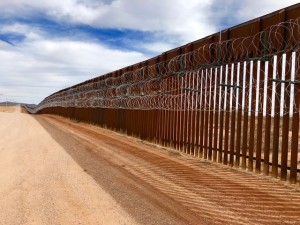 I got pulled over in Arizona recently, a suspected potential drug smuggler. I didn’t mind a bit – it was an honest mistake. Frankly, it felt great. Like I could be considered dangerous. A rebel. An hombre. Not just your average white American codger.

But no, I wasn’t smuggling anything. I did have a bottle of Smirnoff but that’s not illegal (although I could be charged with lack of taste). Like any red-blooded American patriot, I felt compelled to see what this border crisis is all about. I went to Naco, a small Arizona border town south of Bisbee.

Naco’s nothing much. Dirt streets, low-slung adobe homes, shaded windows. Huge dump trucks were parked by the iron-ribbed fence, a mile east of the border crossing. I pulled up next to one in my rental car and got out for a look around. Nothing was happening.
I stood and waited a half hour for the caravans to arrive, the horde of migrants. But nada. No migration invasion anywhere. It got boring.

I went back to the car and listened to the radio – Spanish songs and announcers. I did not hear the word “emergencia” once.
And then I saw him. Or her. About a hundred yards down the road, on the other side of the fence. A single figure crouched on a teal blue bucket seat torn from some long-gone vehicle. The bucket seat was sitting on the gravel on the Mexican side.

As I came closer, I got a good look at the crouched figure. There was no doubt. It was a Chihuahua. The bony dog had its head deep into a tin can licking out the last drops. My mind flashed: photo op. But when I stepped up to the iron bars to take a pic, the pooch heard me and slunk off, tail curled through tiny legs, continually looking back to see if I might have something to eat. Emergency rations for a hungry mutt.

I had little to offer other than sunflower seeds and gum. I went to my Camry and brought back a handful of seeds and a stick of Big Red. I offered them through the fence, but the Chihuahua wouldn’t come near. Didn’t trust me. Can’t say I blame him. Or her. Or them.
Before I left, I sent my apologies and best wishes through the iron bars.

Mexico has had its fair share of immigration problems. It was in the San Pedro Valley, near Naco, where Coronado and his immense force of Conquistadors marched through in 1540 heading north in search of the fabled Seven Cities of Gold. It was a fruitless journey. As was mine.

Finding no crisis in Naco, I headed north on two-lane roads and came to Sonoita. At a wide intersection, turning onto a road toward Tucson, I turned too early and ended up in the wrong lane going the wrong direction. A simple mistake. One anyone could make.

Two Border Patrol vehicles were parked on each side of the road. The officers saw me and no doubt smirked. One of them tailed me for two miles before pulling me over. I like to think he was waiting to see if I’d make a dash for it, but in reality he was probably running my plate.

I stopped the car and two officers approached. One stood back and to the side, in my blind spot. The other spoke and asked for my ID which I handed over. He asked what I was up to and I didn’t lie. I said I was investigating the border crisis. I think one of his eyebrows raised.

“Mind if we take a look in your trunk?” he said.

I paused to ponder it. Do I mind that? Did he have the right to search it? What if there’s something in the trunk I don’t know about? My inner voice said hell yeah I mind, but my outer voice said, “Knock yourself out,” and I popped the trunk.

They found nothing. No drugs. No warrants. No bust. No glory.

The officer seemed disappointed. He looked me in the eye and said smugglers often miss the same turn I just missed when they see their Patrol vehicles. In other words, I fit the pattern of a smuggler. I smugly put my sunglasses on and pulled my hat down low as I drove off. A codger to be reckoned with.

The fact is, illegal border crossings are at a near 40-year low.

Dept. of Homeland Security data shows that undetected unlawful entries into the US from Mexico decreased from 851,000 in 2006 to 62,000 in 2016. Other reviews from independent groups seem to agree there is no emergency crisis at the Mexican border. Chihuahuas may beg to differ.

Coronado on his quest for gold went all the way to Kansas before concluding he’d been hoodwinked. He had his guide, a native known as the Turk, killed by garrote. Then he mounted up and slunk back down to Mexico City, his tail through his legs (he fell off his horse and had to be carried part of the way). He died at age 44, a bankrupt and broken dude.

Makes me wonder what folks 500 years from now will think of our current Coronado – and his deluded search for gold, glory, and fame – again in vain. To those in the future, I send my apologies and best wishes. Happy trails.