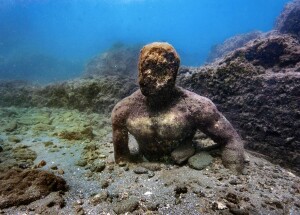 In its glory days, the Roman coastal city of Baiae was the Mar-a-Lago of its time. Roman leaders and the elite had vacation villas there, including Julius Caesar and Caligula. Seneca described Baiae as a “vortex of luxury” and “harbour of vice.”

It didn’t last. After 600 years, the resort town was sacked by Muslim raiders in the 8th century and by 1500, Baiae was abandoned. The water level slowly rose (through volcanic vents) and the ancient ruins are now an empire under the sea. Makes me think of our current fledgling (compared to Rome) republic. How long will it last? The waters are rising. That’s a fact.

It also made me think of that gut-punch of a movie, Planet of the Apes, with Charlton Heston coming upon the Statue of Liberty buried to her waist in the sand, as he realized the planet he was on was Earth, sometime in the future.

I tried adding a photo of the Statue of Liberty to the picture above, half sticking out of the sea bottom. But using only scissors and tape (lacking Photoshop skills), the image looked stupid. Laughable. Just as I’m sure ancient Romans, if alive today, would deem the image above to be.